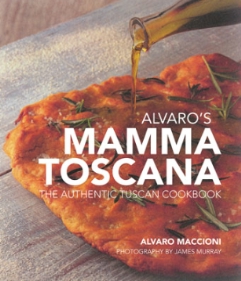 In this classic Italian cookbook, restaurateur Alvaro Maccioni presents 165 recipes that capture all the goodness and robust flavours of real Tuscan country cooking. Inspired by the family meals cooked by his mother and grandmother, Mamma Toscana features Tuscan dishes such as Agnello in Salsa and Pasta d’Estate. Alvaro”s memories of Tuscany are woven throughout the book, evoking a vivid and colourful picture of Tuscan country life; the feast days, the festivals, the baking-hot summers. Alvaro Maccioni has been a chef and restaurateur for over 30 years. In 1975 he opened La Famiglia, which quickly established a reputation for excellence. In 1996, Alvaro won first prize from the Accademia Della Cucina Italiana – the first time the prize has been awarded outside Italy. As Alvaro says: ”If you can cook like your mother, you are a great chef; if you can cook like your grandmother, you are even better.”

Alvaro Maccioni has been described by British food critic Fay Maschler as ”the Godfather of many a London trattoria.”. Alvaro was destined to take over the family farm but instead headed for the famous hotel school in Lausanne.