Batsford’s Glasgow Then and Now

History of the city in photographs 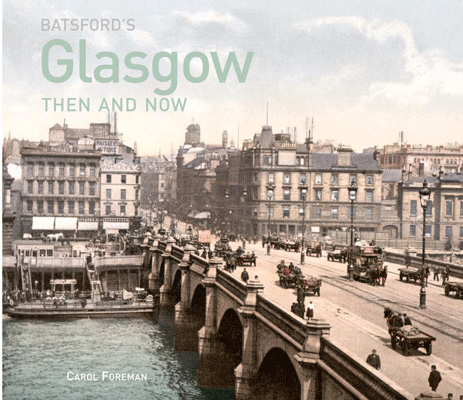 Glasgow Then and Now takes many classic archive photos of the city and compares them to the scene today. It reveals a transition from an industrial city based around the Clyde, its docks and great shipyards, to a modern twenty-first-century economy. Today, the shipyards are all but gone, but the docks are finding new purpose as evidenced by some spectacular comparisons between old and new.

Some 70 historic photographs of Glasgow’s past are paired with specially commissioned contemporary views taken from the same vantage point. You can see the same streets and buildings as they were ‘then’ and as they are ‘now’. It includes  the Cathedral and Necropolis, Provand’s Lordship, the Tontine Building, Saltmarket, City Chambers, Royal Exchange, St Enoch Hotel, Jamaica Bridge, Doulton Fountain, Argyle Street, Sauchiehall Street, Britannia Music Hall, Glasgow University, Gallowgate, Trongate, Gorbals, Queen’s Dock, Yorkhill Dock and Hampden Park.

Part of the bestselling ‘Then and Now’ series, this charming contrast of old and new photographs highlights the stunning changes – and the equally amazing similarities – of one of the most culturally thriving cities in Britain, its well-known places but also some of its hidden gems.

Author of a dozen books on Glasgow history, Glasgow Then and Now is written by popular local historian Carol Foreman. She is following in the footsteps of C. S. Minto who first compiled Victorian and Edwardian photos for Batsford in the late 1960s. As an industrial powerhouse of the Victorian era the city was photographed with great precision and regularity over the years.