Golfing History in the Words of Those Who Made It 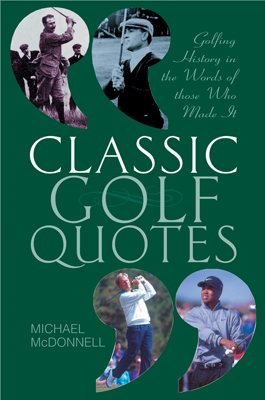 There is a commonly held belief that golfers are calm and contained and never give vent to their feelings in public. The truth, however, indicates otherwise. There is as much passion and emotion in the seemingly genteel, ancient pursuit of golf as in any boxing title match. Golfers are driven by a multitude of personal motives, including ambition, jealousy and defiance. But above all, there is an honesty that is shared by all because golf is a great leveller – golfers are victims of the game, never its complete master. "Great Golf Quotes" is a catalogue of two thousand of the most expressive and insightful thoughts and sayings of players and commentators, from past centuries to the present day. They define the essence of golfing, and range from frustrated anger (Seve Ballesteros telling his caddie, ‘It’s not your fault. It’s mine because I listen to you’), to self-deprecation (Bruce Crampton, finishing second for the fifth time, ‘I shall appear next year in my customary role as defending runner-up’). This is the world of golf as seen by its leading characters who were brave – or daft – enough to voice their thoughts in front of a camera notebook or tape-recorder.