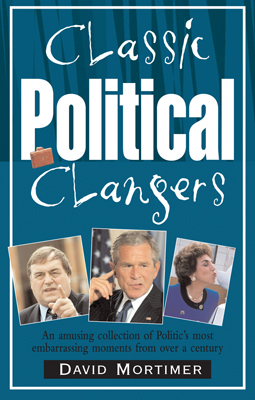 In this riotously entertaining collection of true stories from Westminster and beyond are tales of such political ineptitude, scandal, blunder and impropriety to make even the most gaffe-prone minister blush.

Covering the most notorious political events of the 20th and 21st centuries, ‘Classic Political Clangers’ shines the spotlight on the Profumo-Christine Keller affair; David Mellor and the Last Chance Saloon debacle of the 1990s; Ted Heath vs. the miners in 1974; the Winter of Discontent; Margaret Thatcher’s fall from grace; Harold Wilson and the Pound in Your Pocket fiasco of 1967; and of course Neville Chamberlain and his peace in our time speech in 1938. And of course the more recent tale of President Bush’s ’embarrassing leak’ that made the front page of ‘The Times’.

From assassination attempts to public brawls, calumny, smear, innuendo and infidelity, David Mortimer’s book proves that Britain has a pre-eminent claim to the title of the world’s leading political asylum.