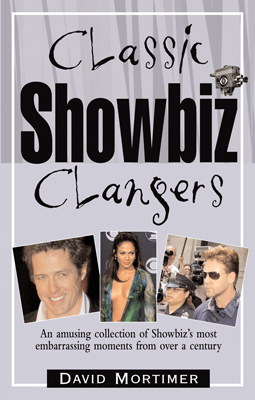 Showbiz might not be the second oldest profession, but it’s not far off. Ever since Nero fiddled while Rome burned and Salome demanded so outrageous a fee for dropping her veils that she ended up with the worst notice in history, the human instinct to get up and perform has produced a pleasing mountain of ill-timed gaffes.

‘Classic Showbiz Clangers’ collects some of the more engaging – or notorious – examples from the 20th and 21st centuries, ranging from Hugh Grant’s ill-advised encounter with the divine Divine Brown in a white BMW to the over-eager radio announcer who invited his listeners to ‘stay stewed for the nudes’ as a news-flash beckoned.

David Mortimer’s hilarious look at stage, screen, variety, panto and more will lead you to discover how the great Edmund Kean single-handedly wrecked a performance of ‘Macbeth’ and what cured Winona Ryder of shopping, not to mention Bob Monkhouse’s unique method of sorting out a heckler. And if that seems a little tame, what was it that Angus Deayton was able to teach Caroline Martin that she didn’t already know? Read on and find out!