London Then and Now® 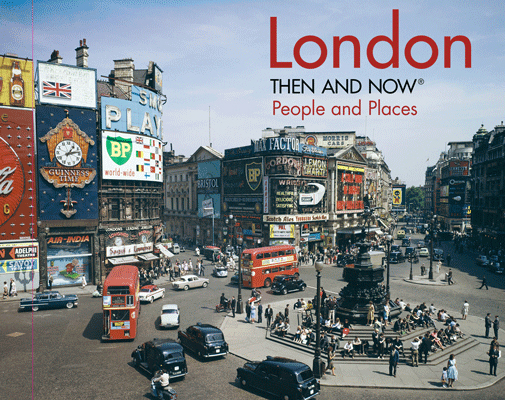 London Then and Now – People and Places takes an amazing cross-section of vintage photographs of London from the 1850s through to the 1960s, and pairs them up with the same view as it looks today. The great tourist destinations are all included: Buckingham Palace, Tower of London, Houses of Parliament, Whitehall, Trafalgar Square, Covent Garden, the British Museum, St. Pauls Cathedral and Hyde Park, along with classic London pubs, famous theatres, the grand stations,  and Carnaby Street and the Kings Road.

The book travels along the Thames through Hammersmith, Barnes and Richmond out to Hampton Court, plus we get a fleeting glimpse of Chuck Berry and the Rolling Stones posing on Park Lane and walking out of court in Southcombe Street. There are Dickensian street scenes, plus ‘The Old Curiosity Shop’ and coaching inns that Dickens visited.

Frank Hopkinson is a photographer with a wide variety of commissions in books, websites and magazines. His most recent work for Pavilion Books has been for Puerto Rico Then and Now, Savannah Then and Now, Brooklyn Then and Now and Paris Then and Now.