A Life of Sorts 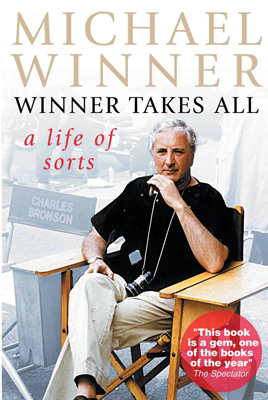 Michael Winner, the legendary film director, writer and food critic, is a colourful figure who has led a remarkable life. He has a reputation for being outspoken, and, true to form, in his autobiography he tells it like it is with sharp and insightful observations.

‘Winner Takes All’ begins with his unconventional childhood as a Jewish boy attending a Quaker boarding school and introduces his eccentric mother, who was a compulsive gambler. Michael Winner gained his first taste of fame, when aged fourteen, he met the stars for a showbusiness column in twenty London local papers. At Cambridge he edited the student newspaper and became a local celebrity. The author is a natural raconteur and his anecdotes from the film industry are compelling. He recounts his early life with relish and provides fascinating accounts of his experiences directing some of the world’s most famous actors and actresses, including Charles Bronson, Sophia Loren, Joan Collins, Orson Welles, Marlon Brando and Anthony Hopkins. Many of them became close friends.

As a food critic, Michael Winner is famous for shooting from the hip. Love him or loathe him, he is constantly in the public eye. His esure TV commercials – which produced a national catchphrase ‘Calm down dear!’ – have been an advertising industry phenomenon. What may come as a surprise to the reader is the gentle side that he reveals in his autobiography. He speaks with candour about his private life; he admits his fear of relationships with women and confides the heartbreaking story of the love of his life, a famous female star.