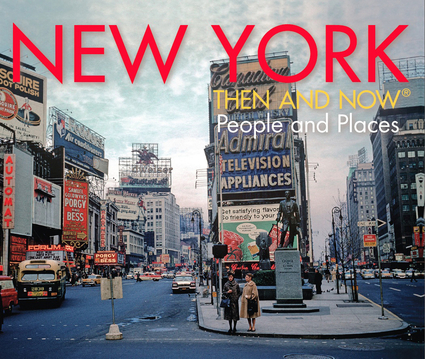 New York Then and Now – People and Places is a whole new take on Anova Books’ best-selling trademark series. Featuring predominantly images from New York City it shows how much and how little has changed over 150 years – since the dawn of photography up to the 1960s and 70s. As well as New York City’s most favorite tourist locations; Brooklyn Bridge, Statue of Liberty, Empire State, Rockefeller Center, Times Square, Fifth Avenue, Central Park, Columbus Circle – there are excursions to favored destinations in New York state, such as ‘Mark Twain country’ – the Finger Lakes, Long Island and the Montauk Lighthouse as well as the Falls at Niagara. Packaged in a smaller format than any other Then and Now, the text has been stripped back to small captions to allow the amazing collection of past and present photos to speak for themselves.

Evan Joseph is the New York photographer responsible for the epic photography in New York at Night. He has been a member of the faculty of Parsons School of Design and The Art Institute of NYC and his work has been published in leading magazines around the world, including Architectural Digest, Elle Décor, NY Living, New York Magazine, The New York Post, The Wall Street Journal, The New York Observer, and The New York Times.

READ MORE
Instagram
So nice to shout about this one! @jennychandleruk