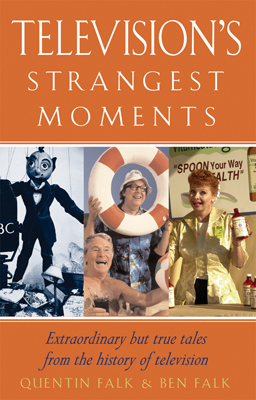 Ever since John Logie Baird first publicly demonstrated this now all-pervasive medium in his small Soho laboratory, the history of television has been littered with remarkable but true tales of the unexpected.

Ranging from bizarre stories of actors’ shenanigans to strange but true executive and marketing decisions, and covering over one hundred shows, series and episodes from both behind and in front of the camera in British and American television studios, ‘Television’s Strangest Moments’ is the ultimate tome of TV trivia. Why did the quintessential English sleuth The Saint drive a Swedish car? What happened when Michael Aspel met Nora Batty on the set of the 1960s drama-documentary ‘The War Game’? Why is the Halloween chiller ‘Ghostwatch’ still unofficially banned by the BBC?

From live TV suicide to Ricky Martin’s disastrous candid camera-style episode involving a young female fan and several cans of dog food, ‘Television’s Strangest Moments’ will keep you hooked when there’s nothing worth watching on the box.

Quentin Falk is a distinguished film critic who writes for the ‘Sunday Mirror’ and is the editor of the BAFTA magazine ‘Academy’. He lives in Little Marlow, Buckinghamshire. Ben Falk is his son and co-author.