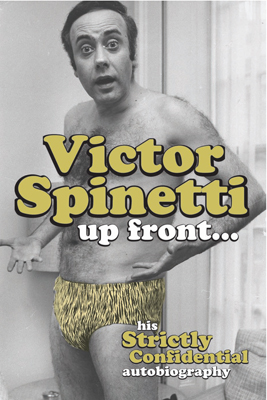 Described by Sir Paul McCartney as "the man who makes clouds disappear", Victor Spinetti is one of Britain’s best-loved and most outrageous performers. He became known to the Sixties generation through his comedic roles in the landmark Beatles films and the now classic Return of the Pink Panther, starring Peter Sellers, and his remarkable wit and versatility has earned him fresh popularity with every generation since.

A veteran stage actor, writer and director, Spinetti gives us an irresistible account of his own life, from his Welsh-Italian upbringing to his role as one of the few trusted friends of the Beatles – they insisted he was in every film they made – through to his recent portrayal of Einstein on stage in London. Highlights include his 1964 Tony award for his Sergeant Major in Joan Littlewood’s Oh What a Lovely War!, working with Laurence Olivier, close encounters with Marlene Dietrich, Elizabeth Taylor and Richard Burton, and collaboration with John Lennon on ‘In His Own Write’, the play he subsequently directed at the National Theatre. Up Front contains startling new insights into life with the Beatles, and a selection of previously unpublished photos of the Fab Four.

Spinetti’s charismatic personality and his fabulous ability to entertain, spanning over forty years and forty films, combine to make this a book of exquisite charm, joy and irreverence.

Victor Spinetti is an actor, writer and director. He has been one of the best-loved figures in British theatre for over 40 years, and his career has taken in everything from award-winning Broadway performances to filming with the Beatles.