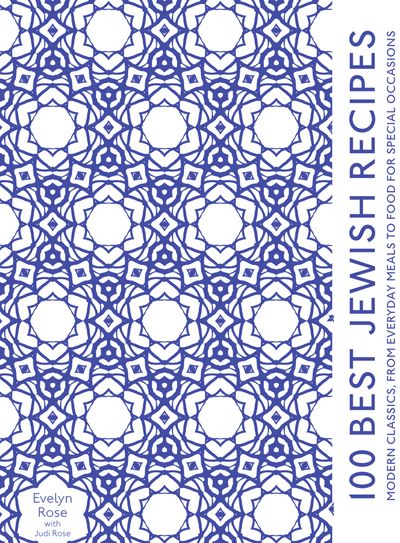 Find inspiration for no-fuss, flavoursome classics, from the kitchens of Eastern Europe and the Mediterranean to the Middle East and beyond.

There are mouth-watering ideas for small plates and soups, mains and desserts, as well as bakes and breads. You’ll also discover the best dishes to prepare for every major festival, alongside advice on how to make everyday recipes suitable for the kosher kitchen. For everything from perfect pickles to great gefilte fish, and brilliant bagels to meltingly tender cholent, this is the ultimate contemporary guide to the best Jewish food.

Author: Evelyn Rose
Format: Hardback
Release Date: 11/02/2016
Pages: 192
ISBN: 978-1-909108-72-1
Evelyn Rose was a world authority on Jewish food and the foremost Jewish food writer in Britain. She was food editor of the Jewish Chronicle for over three decades and regularly appeared on TV and radio. In 1989 she was awarded an MBE for her services to the consumer and was an Honorary Life Fellow of the Institute of Home Economics. She died in May 2003.Judi Rose cooked with her mother for over 30 years. They wrote two cookbooks together, the first when Judi was a student at Cambridge University and the second, Mother and Daughter Jewish Cooking, in 2000. She is a food writer, consultant and culinary expert. She divides her time between London and New York.