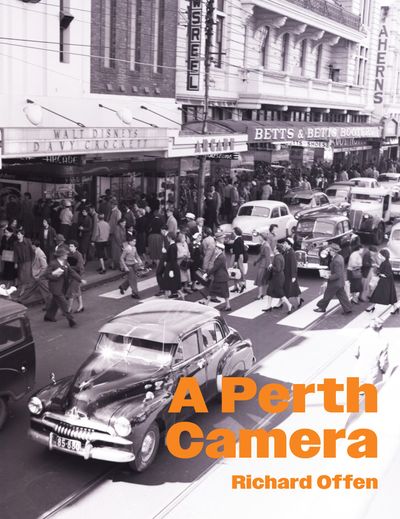 A Perth Camera is a treasure trove of rediscovered images by the late Ernie Polis from a lifetime spent photographing the city.

Following his high-profile success with Perth Then & Now and Lost Perth, Richard Offen was contacted by the son of the late Ernie Polis, the long-time Perth City Surveyor.

Ernie had been both a keen amateur photographer (and in his role as surveyor had access to some great viewpoints) and a collector of historic photos of the city.

This trove of previously unpublished images give a unique view of the city from the 1950s through to the 1990s. Richard Offen has assembled the photos into themed chapters, sometimes revealing aspects of buildings that not even Heritage Perth were aware of.

Along with Richard’s insightful captions, the photos show both what was lost and give a Then and Now comparison between modern-day Perth and the one well-known to Ernie Polis.

Author: Richard Offen
Format: Hardcover
Release Date: 03/01/2023
Pages: 144
ISBN: 978-1-911682-73-8
Richard Offen retired in 2017 after 13 years as executive director of Heritage Perth. During that time he was able to immerse himself in the history of Perth and Western Australia and has helped to dispel the urban myth “Perth has no history”. In retirement, he writes, still takes walking tours of the city’s historic sites and is a popular lecturer on the subject. Richard also remains a regular broadcaster on both radio and television. He was the co-author of the National Trust book The Living Coast and penned the captions for a book of aerial photographs of the British coast entitled Coastline UK. In his spare time, Richard is on the Board of the Anglican Schools Commission, Deputy Chairman of the Swan Bells Foundation, on the Board of the Young Australia League, Secretary of the Sharpe Trust and a Churchwarden at Christ Church, Claremont.