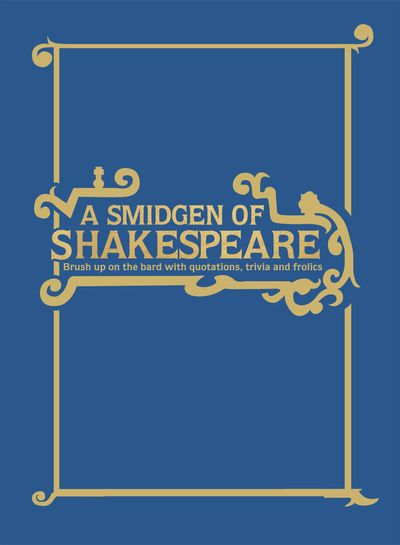 A Smidgen of Shakespeare: Brush up on the Bard with Quotations, Trivia and Frolics

A quirky exploration of Shakespeare and his plays, full of facts, figures and trivia to amuse, impress and entertain.

If the mere mention of Shakespeare fills you with dread, evoking memories of arduous afternoons spent in stuffy classrooms with eccentric English teachers, it is time to reconsider that far from being three-hour marathons of unintelligible boring rubbish, Shakespeare’s plays are in fact exciting, tragic, funny and often downright rude – full of memorable plots, great insults, filthy jokes and eccentric characters.

A Smidgen of Shakespeare lets you know the essentials, as well as providing you with a wealth of facts and trivia to amuse, impress and entertain (at school, in a seminar or down the pub). Succinct, pithy entries cover everything from Shakespeare’s greatest villains to his most cutting insult (hint: it involves your mum). As a playwright, he is truly a global figure – his work has been translated into more than 70 of the world’s languages, including Latin, ancient Greek and even Klingon. Did you know, however, that Shakespeare’s influence even extends into the outer reaches of our solar system? 24 of Uranus’s 27 moons are named after Shakespeare characters.

The hundreds of entries range from the truly enlightening to the utterly obscure in this comprehensive guide that will re-introduce you to the fascinating world of Shakespeare’s work.