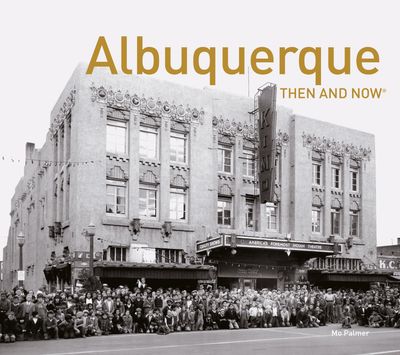 The Albuquerque area was home to Native Americans for centuries before the Spanish came. The valley provided fertile fields and the river nurtured crops and people. Albuquerque survived drought; enemies; Spanish, Mexican, and American rule; and the Civil War. A thriving tourist industry rode in on the railroad in 1880 and grew with “tin can tourists” passing through on Route 66. Albuquerque is the newcomer among original cultures, located between ancient pueblos and near Apache and Navajo country. Today the city is known for its sophisticated medical care first established during the tuberculosis epidemic; for its technological facilities, seeded by World War II; and for its cosmopolitan ambience. Plus it provided the locations for hit Netflix series, Breaking Bad.

Author: Mo Palmer
Format: Hardback
Release Date: 01/08/2019
Pages: 144
ISBN: 978-1-911624-06-6
Mo Palmer is a native New Mexican who has lived in Albuquerque for fifty years. She worked at the Albuquerque Museum for fifteen years as a volunteer and as photo archivist, curating a 100,000-item historical collection. She is also a freelance writer and has coproduced eight Albuquerque history documentaries. Palmer writes a monthly history column for the Albuquerque Tribune, has collaborated on an exhibit and catalog with the National Hispanic Cultural Center, and is an oral historian. She teaches New Mexican history to seventh-grade students at Sandia Preparatory School.