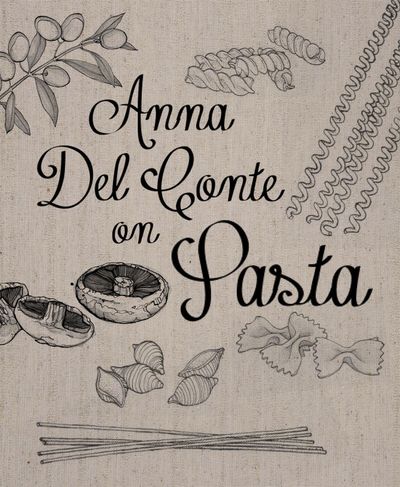 Nigella Lawson described Anna Del Conte’s book Portrait of Pasta as ‘The book that actually changed the way the English thought about Italian cooking… and the instrumental force in leading us from the land of spag bol, macaroni cheese and tinned ravioli’.

This is a delicious collection of 120 recipes, many of which can be cooked within minutes. The book starts with a fascinating historical account of pasta, then guides you through how to cook pasta, and explores the different types of pasta. The recipes, which come from every region of Italy, are divided into easy to navigate chapters on meat, dairy, vegetables, soups, stuffed and baked pastas.

This is a classic Italian cookbook, and will quickly prove essential in your kitchen.

Her accolades include the prestigious Duchessa Maria Luigia di Parma prize for Gastronomy of Italy, in 1987; the Premio Nazionale di Cultura Gastronomica Verdicchio d’Oro prize for her contribution to the dissemination of knowledge concerning authentic Italian cooking, in 1994 and In 2010, she was awarded the honour of Ufficiale dell’Ordine al Merito della Repubblica Italiana, in recognition of the importance of her work in keeping alive Italy’s good image in the UK.

Author: Anna Del Conte
Format: Digital download
Release Date: 17/09/2015
Pages: None
ISBN: 978-1-910904-46-6
Anna Del Conte is widely recognised as the doyenne of Italian cooking. Her books include Italian Kitchen, Cooking with Coco and The Classic Food of Northern Italy, which in 1996 won both The Guild of Food Writers Book Award and the Orio Vergani prize of the Accademia Italiana della Cucina. She was also awarded the Guild of Food Writers Lifetime Achievement Award in 2011.