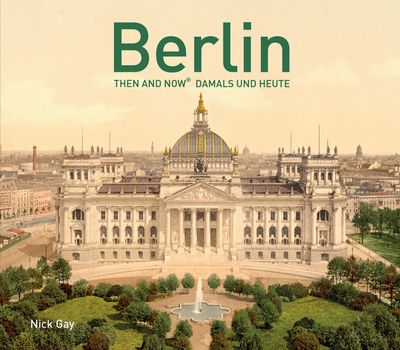 Berlin Then and Now captures the stark contrast between what came before and after the great conflicts of the twentieth century, using archival photographs of the city’s grand buildings, monuments, and boulevards alongside modern views of the same scenes today.

Few cities in Europe have undergone as many transformations as Berlin in the past hundred years, or have risen from the rubble to stand as proud and vibrant as the city does today.

Nick Gay’s book shows the effects of Hitler’s building plans of the 1930s, Allied bombing in World War II and the post-war division of the city into East and West and the subsequent reunification after 1989.

Author: Nick Gay
Format: Hardback
Release Date: 09/06/2016
Pages: 144
ISBN: 978-1-910904-78-7
Nick Gay is a graduate of Cambridge University and spent much of his early life abroad. He moved to Berlin in 1991 and founded Original Berlin Walks with his partner Serena Gay in 1993, offering guided walking tours in and around the city. Nick is often in demand as a guide for his extensive knowledge of Berlin in the Third Reich and during the Cold War.