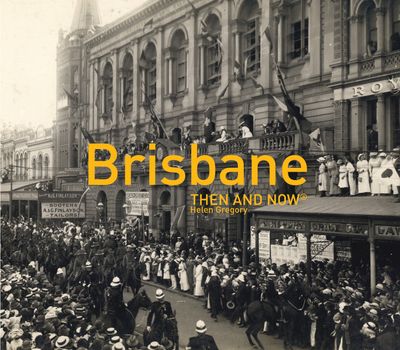 Using archive photos from the late nineteenth century through to the 1950s, Brisbane Then and Now matches historical views with their twenty-first century equivalents.

Brisbane is a vibrant, fast-changing city. As the city has grown across the last century and a half many of the classic Victorian buildings have been preserved to blend with the modern cityscape – other, less prestigious developments, have fallen by the wayside. Brisbane Then and Now shows how the high-rises have sprung up to form a dramatic backdrop to its older buildings, plus some sites that have disappeared, or changed beyond all recognition. Using archive photos from the late nineteenth century through to the 1950s, Brisbane Then and Now matches historical views with their twenty-first century equivalents.

Author: Helen Gregory
Format: Hardback
Release Date: 14/07/2015
Pages: 144
ISBN: 978-1-910496-73-2
Helen Gregory was born in Brisbane and is a historian specializing in Queensland's history and cultural heritage. She has taught in the Department of History at the University of Queensland and was Director of Cultural Heritage at the Queensland Environmental Protection Agency. She has written historical backgrounds for major museum exhibitions at the Queensland Museum and The Australian Workers Heritage Center.