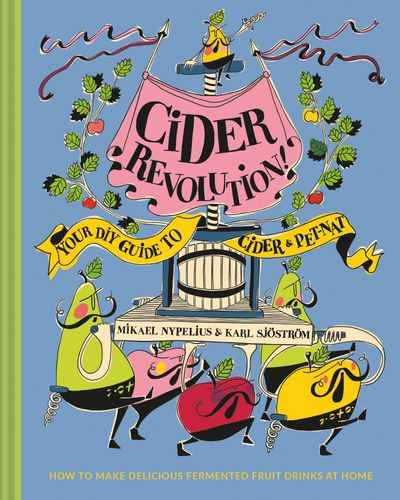 After years spent working in the restaurant industry, specialising in wine and spirits, friends Karl Sjostrom and Mikael Nypelius decided to launch ‘Cider for the People’.

Fascinated by the growing trend in natural wines, Karl and Mikael began to produce their own cider and pet-nat (natural sparkling wines made with minimal intervention and without added sugar) using 100% hand-picked fruit from the farms and villages outside Malmo, Sweden. Their aim is to make modern, natural drinks using only the natural occurring yeast of the fruit, without any additives or preservatives. Produced under the name ‘Fruktstereo’ each harvest is named after an iconic album and they have been producing hits for distribution across the world since 2017.

Contents include: What is cider? Harvesting, Juicing, Fermenting, Ageing and bottle fermentation, Step-by-step, Recipes, The theory behind the bubbles and Fruit lexicon.

In Cider Revolution! Karl and Mikael seek to pass on their passion for cider and inspire others to taste, appreciate and try their hand at making their own batch from home, with minimal fuss and only a few basic pieces of equipment. As well as passing on the secrets of the cider-making processes, they give us recipes for cider and pet-nats and look at the range of fruits that can be used for brewing, including pears, cherries, plums, rhubarb and berries. There are tasting notes so that your cider can be appreciated in much the same way as any fine wine. The ideal book for cider fans or anyone looking to dip into home brewing – it’s time to join the cider revolution!

Author: Karl Sjostrom
Format: Hardback
Release Date: 07/07/2021
Pages: 160
ISBN: 978-1-911663-48-5
Under the slogan “Cider for the People!” Karl Sjostrom and Mikael Nypelius produce contemporary Swedish cider in the company Fruktstereo. They share a background as sommeliers in restaurants and are followers of the growing trend for natural wines. They run their business from Malmo, Sweden, where produce everything by hand – from fruit to finished bottled product.