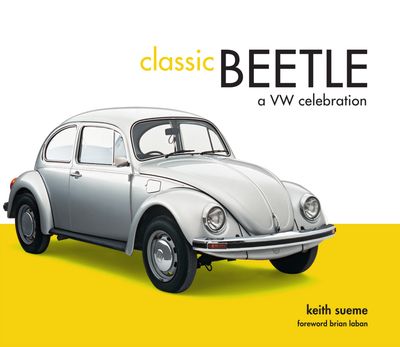 The specially commissioned photographs in this book display each Beetle variant model in their full glory.

From the military vehicles of the 1930s through the post-WWII cars, up to and including the final German-built model of 1979, this book offers a loving tribute to the car in sumptuous detail. The beautifully restored and kept cars of each decade are displayed across several double page spreads. Parts of each model are shown in close-up, compared and explained using studio photographs of each model’s steering wheels, indicators, engine bays and other aspects of design and function.

The history of the Beetle is illustrated using contemporary archive photography, and attention is given to the cultural impact of the Beetle as shown through movies (such as the Herbie franchise), advertising and graphic design. This large format, fully illustrated book presents the Beetle as an object of art, albeit one that starts every time and will run forever on reused cooking oil, with a little modification.

Author: Keith Seume
Format: Hardcover
Release Date: 01/11/2016
Pages: 304
ISBN: 978-1-910496-61-9
Keith Seume is a founding editor of Volksworld and Classic Porsche, and currently edits VWUltra magazine. He is the author of several books on VW Beetles. A recognised Beetle expert, he has raced them, drag-raced them and customised dozens. His 1951 rare Okrasa-engined Beetle was photographed for this book.