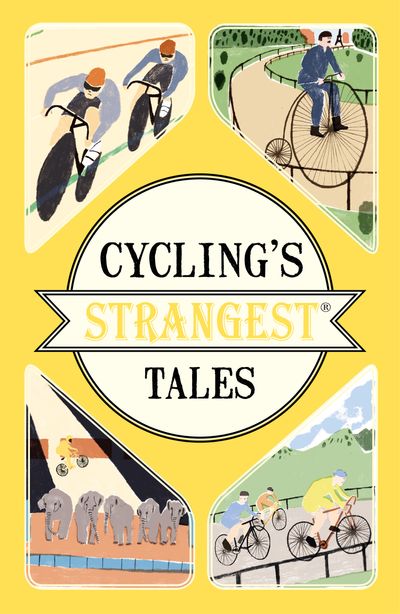 A quirky collection of true stories from the stranger side of cycling, including doughty Edwardian explorers, intrepid tightrope cyclists and a long-forgotten bike growing in a tree.

Extraordinary but true stories from 200 years of cycling history.

Part of the bestselling Strangest series, Cycling’s Strangest Tales is a quirky and fascinating collection of stories from cycling’s history. Included are stories of Thomas Stevens, the doughty Englishman who circumnavigated the world on a penny farthing, the 1904 Tour de France winner who was disqualified for catching the train, the 1937 Japanese invasion of China spearheaded by 50,000 bicycle-mounted troops, and the man who soared over nine circus elephants on an ordinary yellow bike. The stories come from every corner of the cycling world, whether it’s the open road, the velodrome or the BMX track.

Brought bang up to date for 2017 with a selection of new stories, Cycling’s Strangest Tales is the perfect gift for anyone who’s in love with life on two wheels.

Author: Iain Spragg
Format: Paperback
Release Date: 01/08/2017
Pages: 256
ISBN: 978-1-911042-55-6
Iain Spragg is an author, Londoner and daily Tube traveller. His favourite Underground line is the Victoria line as not only does it has more than its fair share of strangeness, it also connects him to his beloved North London football team. Iain is the author of The Official Team GB Olympic Annual 2012, The Big Book Of Football's Funniest Quotes, The Lewis Hamilton Story and The Reduced History Of Rugby'The Official England Rugby Miscellany'