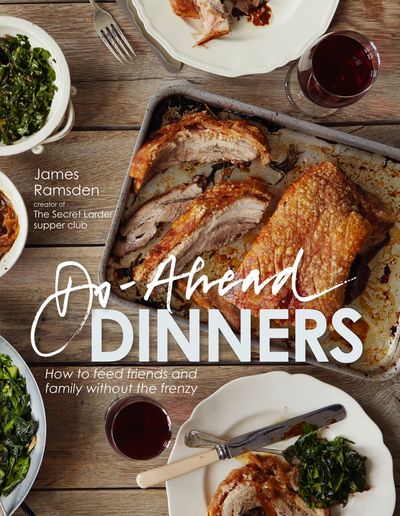 Do-Ahead Dinners: how to feed friends and family without the frenzy

Cooking for groups can be stressful, yet at his supper club James Ramsden has built a reputation for creating exciting, trendy, tasty food whilst being able to maintain a relaxed, sociable presence among his guests. James offers an array of inexpensive recipes, to be prepared ahead and served fuss-free so you aren’t stuck in the kitchen.

‘This is a book you really want. No fifteen minute magic or culinary sorcery, just practical, staged cooking
of the most sumptuous dishes. Made me salivate.’
Yotam Ottolenghi

Cooking for groups can be a stressful operation, yet at his supper club, The Secret Larder, James Ramsden has built a reputation for creating exciting, trendy, tasty food without the gaga gourmet, whilst being able to maintain a relaxed and sociable presence amongst the guests. This is because he prepares the majority of his food ahead.

In this book, James offers an exciting array of inexpensive recipes, that can be prepared ahead and served up without a fuss so that the cook can be with their guests, not stuck in the kitchen. Do-ahead cooking need not be limited to hotpots and pies; James’ innovative recipes include scotch quail eggs with homemade brown sauce, fennel soup with brown shrimp and dill, pig cheek salad with pickled shallot and buttermilk dressing, rhubarb crumble ice cream and raspberry gin and tonic. The recipes are not exclusively for entertaining – many double-up as easy after-work suppers. This is a book for every cook’s bookshelf.

Author: James Ramsden
Format: Hardback
Release Date: 15 Aug 2013
Pages: 240
ISBN: 978-1-86205-997-9
James Ramsden is a London-based Yorkshireman from Ripon. He runs the Secret Larder supper club and has written about food and cookery for The Times, The Guardian, Sainsbury\'s Magazine, the FT and Waitrose Kitchen among others. He is the author of Small Adventures in Cooking.

”'This is a book you really want. No fifteen minute magic or culinary sorcery, just practical staged cooking of the most sumptuous dishes.” - - Yotam Ottolenghi

”'It’s fantastic. I want to cook every single thing in it.” - - India Knight

”'James Ramsden’s writing is so compelling and his recipes so accessible that Do-Ahead Dinners made me want to run straight into the kitchen and start cooking.” - - Russell Norman of Polpo