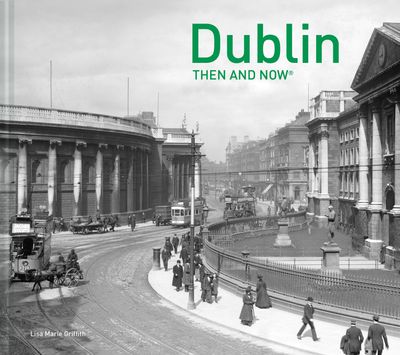 Dublin Then and Now matches archival images with contemporary views to reveal the past and present of this fascinating city.

Dublin’s rich architectural heritage ranges from medieval castles and cathedrals to a wealth of elegant Georgian townhouses. Capturing its famous streets, bridges, markets, parks and pubs, this book reveals the past and present of a city steeped in literary history, blessed with architectural beauty and full of character.

Author: Lisa Marie Griffith
Format: Hardback
Release Date: 04/10/2018
Pages: 144
ISBN: 978-1-910904-84-8
Lisa Marie Griffith studied history at University College Dublin and a PhD at Trinity College. She became fascinated by the history of Dublin and throughout her studies worked as a walking tour guide in Dublin. Lisa Marie is author of Stones of Dublin: A History of Dublin in Ten Buildings (Collins Press, 2014) and has published a number of essays on Dublin history. She is co-editor of two edited collections of essays, Leaders of the City: Dublin’s first citizens, 1500–1950 (Four Courts, 2013) and Death and Dying in Dublin: 1500 to the Present (Four Courts, 2016). She also presented a series on Anna Livia (now Dublin City FM) for two years on Dublin History. She taught history and was Coordinator of the Cultural and Heritage Studies Programme at the National Print Museum in Dublin. She now works at DCU (Dublin City University).