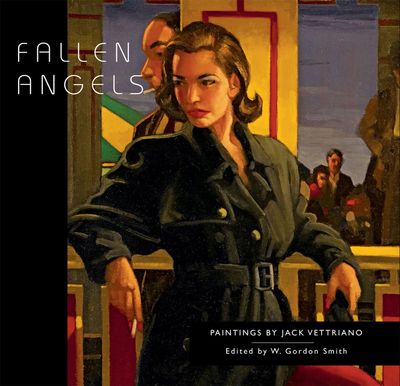 Painter Jack Vettriano emerged from the unlikely background of the Scottish coalfields – unknown and untutored – and has seen his canvases hung in the Royal Scottish Academy.

His first exhibition sold out, then the second. He sent the maximum, three paintings, to the Royal Academy summer show in Piccadilly; all three were hung. Alongside over forty Vettriano paintings are stories, poems, dialogue from plays, and other fine examples of Scottish writing.

W Gordon Smith, playwright and art critic, has woven an anthology of new and old writing round the painter’s images, complementing them, matching their moods, extending the lives of his characters beyond their frozen moments on canvas. Some of Scotland’s most accomplished writers have accepted the challenge to put their imagination into free fall and, by interpreting Vettriano’s paintings in such diverse ways, plunder some of their mysteries and perhaps go some way towards explaining their unique appeal.

Alongside 40 Vettriano paintings are stories, poems, dialogue from plays, an other fine examples of Scottish writing. Smith has woven an anthology of new and old writing round the painter’s images, complementing and extending them.

Author: Jack Vettriano
Format: Hardback
Release Date: 02/04/2015
Pages: 120
ISBN: 978-1-910496-04-6
Jack Vettriano is entirely self-taught. A Scotsman of Italian descent, he left school at sixteen to become a mining engineer working down the Fife coalfields. For his twenty-first birthday a girlfriend gave him a set of watercolour paints and from then on, he spent much of his spare time teaching himself to paint. His first solo exhibition in Edinburgh was a sell-out and since then he has had solo exhibitions in London, Hong Kong and New York. Over the last twenty years, interest in Vettriano’s work has grown consistently. Vettriano’s best known painting, The Singing Butler, was sold at Sotheby’s for close to £750,000. He was awarded an OBE for Services to the Visual Arts. In 2013, a major twenty year Retrospective exhibition of Vettriano's work was staged at Kelvingrove art Gallery and Musuem in Glasgow. He lives in Edinburgh.