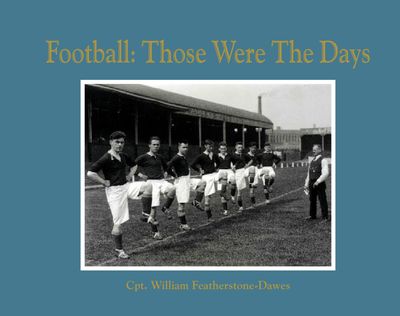 Football: Those Were the Days

In the good old days of association football there was no such thing as WAGs, the balls were made from rhino hide and players made their way to the ground by tram. And the rudest thing you could say to a referee was: “Hoy, referee! Do you need spectacles?” Those Were The Days: Football journeys back through the photo archives to find photos of pre-war footer accompanied by a sparkling commentary, delivered in a Pathé news style that wouldn’t go amiss delivered by Mr Cholmondley-Warner (of Harry Enfield fame). Those were the days when you could still smoke while playing centre forward, when games often ended 6-6 and a broken leg was no excuse to miss the second half.

Author: Captain William Featherstone-Dawes
Format: Hardback
Release Date: 06/10/2011
Pages: 144
ISBN: 978-1-907554-44-5
Captain Featherstone-Dawes attended Harrow school and read Classics at Jesus College, Cambridge, where he achieved the remarkable feat of gaining a Blue for cricket and rugger. Following a commission in the Household Cavalry – he was Army golfing champion four years running – he took up a position with the Foreign Office, which he holds to this day. He is a keen amateur tennis player and watercolourist. On suggestion from a close friend he has taken up writing.