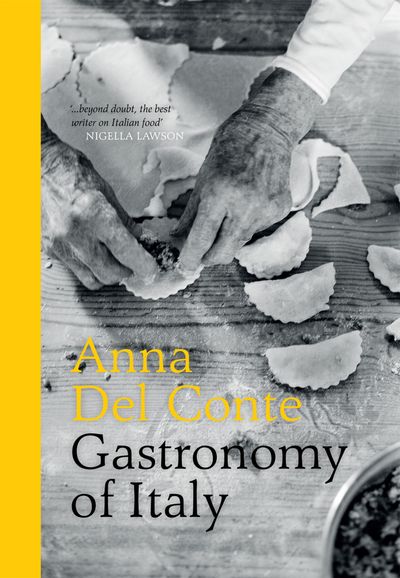 Gastronomy of Italy – the seminal work on Italian food, first published in the 1990s – is revised and updated and illustrated with new photography.

This classic book leaves no stone unturned in its exploration of Italian gastronomy. Anna Del Conte, the doyenne of Italian cooking, defines the country’s regions, ingredients, dishes and techniques for a new generation in her comprehensive explanation of its culinary terms. This simple A-Z format covers all elements of Italian gastronomy from abbacchio to zuppe inglese.

There are over 200 recipes, including the great dishes from every major region of Italy. Variations on the classics – pasta, polenta, gnocchi, risotto and pizzas – sit alongside Anna’s recipes for versions of Italian favourites, such as peperonata, lamb fricassée, ossobuco and less well-known regional specialities.

Specially commissioned photographs of the dishes, ingredients and techniques along with maps of the regions, makes this a truly unique and invaluable book.

Author: Anna Del Conte
Format: Hardcover
Release Date: 01 Dec 2013
Pages: 496
ISBN: 978-1-86205-958-0
Anna Del Conte is widely recognised as the doyenne of Italian cooking. Her books include Italian Kitchen, Cooking with Coco, Gastronomy of Italy and Anna Del Conte on Pasta. The original edition of Classic Food of Northern Italy in 1996 won both The Guild of Food Writers Book Award and the Orio Vergani prize of the Accademia Italiana della Cucina. In 1994 she won the prestigious Premio Nazionale de Cultura Gastronomica Verdicchio d\'Ora prize for dissemination of knowledge about authentic Italian food. She was also awarded the Guild of Food Writers Lifetime Achievement Award in 2011. In 2016 Anna appeared on the BBC programme The Cook Who Changed Our Lives with Nigella Lawson, which won \'Programme of the Year\' at the Fortnum & Mason awards 2017. Anna lives near her family in Dorset.