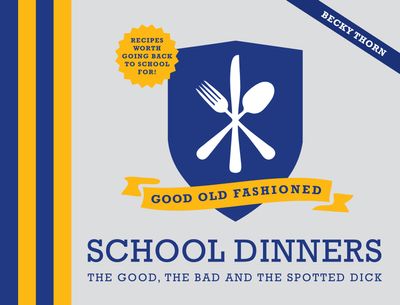 Good Old-Fashioned School Dinners: The good, the bad and the spotted dick

Good Old Fashioned School Dinners, will transport you back to those halcyon days of school canteens, evoking the smells, flavours, tastes and textures, of beef cobbler, spam fritters, chocolate concrete and jam roly-poly. If you remember lusting after a Chopper, a Space Hopper or even The Milky Bar Kid, then chances are you’ll also have had school dinners like this. Steaming pies, sloppy mash and puddings drowning in custard evoke a plethora of memories, some good, others frankly awful – depending on what you had served up when you reached the front of the lunch queue.

Good Old Fashioned School Dinners is replete with recipes to make over fifty dishes, including both traditional favourites and meals that were strictly school-canteen-only. They are all tried and tested, prised from the apron pockets of school cooks or otherwise recreated as authentically as possible. Cook yourself back to a golden age when tank tops were cool and lapels were so wide you could catch them on door frames. Fill your kitchen with glorious smells and fill the stomachs of loved ones with custard – you could even round up a few friends and have a ‘back-to-school’ dinner party.