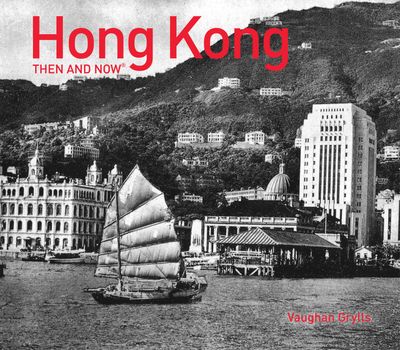 Fascinating vintage photos of Hong Kong have been matched with the same viewpoint today to show the amazing growth and development of this unique city.

Hong Kong was first captured on camera when the British arrived to lay claim to its ‘fragrant harbour’ in 1841. Its fascinating history has been documented through photography ever since – from its rapid expansion as a Crown Colony to its handover to China in 1997 and its present status as one of the world’s leading international financial centres. Pairing rare and previously unpublished photographs with contemporary views taken from the same location, Hong Kong Then and Now highlights the rich and varied history of this constantly evolving metropolis, from Victoria Harbour, the Hong Kong Club and the Star Ferry to Kowloon Walled CIty, Chek Lap Kok Airport and the gleaming skyscrapers of its central banking district.

Author: Vaughan Grylls
Format: Hardback
Release Date: 24/06/2016
Pages: 144
ISBN: 978-1-910904-08-4
Vaughan Grylls is a photographer, author and artist. His photography has been shown in the Photographers’ Gallery, Whitechapel Art Gallery and the Arnolfini. He is represented in several public collections, including the National Museum of Photography, Film and Television, the Contemporary Art Society, Pfizer, Unilever and the Arts Council of Wales. From 1996 to 2005 Grylls was Chief Executive of the Kent Institute of Art and Design. In 2005 he founded the University for the Creative Arts at Canterbury, Epsom, Farnham and Rochester, and serves as Emeritus Professor. He is the author and photographer of Oxford Then and Now, Cambridge Then and Now, Hong Kong Then and Now and Singapore Then and Now.