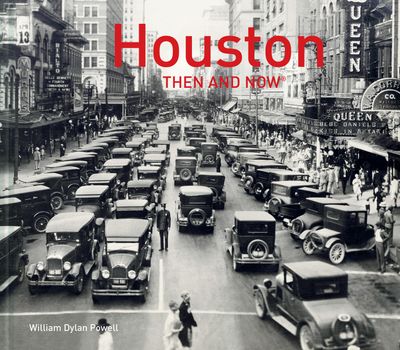 Part of the 4-miliion-selling-trademark series from Pavilion Books – a vivid historical tour of Houston, with the same view photographed today, from a great local author.

In 1836 revolutionaries routed the Mexican army at the Battle of San Jacinto and the nearby town took the name of the battle’s victor, General Sam Houston. Since that time Houston has become America’s fourth largest city, and its magnificent cityscape of concrete, glass, and steel bears little resemblance to traditional Texas imagery. It’s easy to see why its residents, showing allegiance to their unique heritage, proudly refer to themselves as Houstonians rather than Texans.

It was an entrepreneurial New York family who first promoted Houston’s lush landscape and vast potential in the Northeast and Europe, and the town expanded from a handful of tents into a place of over 10,000 residents by 1900. Oil was discovered nearby in 1901 and from then on Houston never looked back.