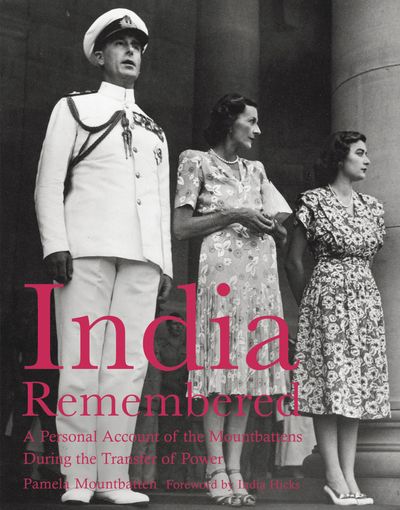 In March 1947 Lord Louis Mountbatten became the last Viceroy of India, with the

year. Mountbatten worked with Nehru, Gandhi and the leader of the Muslim

League, Jinnah, to devise a plan for partitioning the empire into two

independent sovereign states, India and Pakistan, on August 15, 1947 and he

remained as interim Governor-General of India until June 1948.

During this time Lord Mountbatten’s daughter and India’s mother, Pamela, was

with her parents and kept a diary recounting this extraordinary tale of history.

The diaries include their trips to stay in Calcutta, Bombay, Madras, Orissa and

Assam, and the exotic palaces of Indian rulers.

‘India Remembered’ is a scrapbook of private family photographs taken during

through a courtyard, or Gandhi taking tea for the first time at Viceroys House).

Includes many anecdotes from Pamela Mountbatten’s diaries such as

reminiscences of having to leave 10 minutes before dinner was actually

running really late, riding a bicycle through the corridors to make time). Includes

photographs evoking the atmosphere of the Mountbatten’s favourite retreat,

that of Viceregal Lodge in Simla.