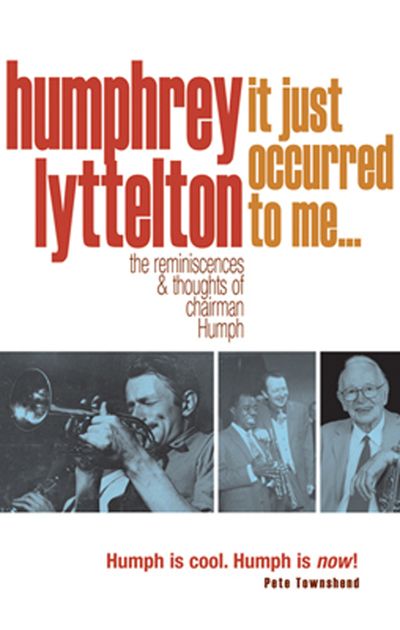 It Just Occurred to Me?: The Reminiscences & Thoughts of Chairman Humph

The legendary band leader and jazz trumpeter, broadcaster and humorist looks back at his extraordinarily rich and varied life and the many colourful characters he has known and played with – from Duke Ellington to Louis Armstrong.

He also recalls his early life as the son of a famous housemaster at Eton, where he was educated. During the war, he served in the Grenadier Guards and, on demobilisation, studied for two years at Camberwell Arts School. In 1949, he joined the “Daily Mail” as cartoonist, wrote the story-line for Trog’s “Flook” cartoon, and also signed a recording contract with EMI. He had the first British jazz record to get into the Top Twenty in 1956 with ‘Bad Penny Blues’. The book will appeal to his large cult following, both from his regular live appearances with his band, as the irrepressible chairman of BBC Radio 4’s popular nonsense quiz ‘I’m Sorry I Haven’t a Clue’ and as the presenter of “The Best of Jazz” since 1967.

Author: Humphrey Lyttelton
Format: Paperback
Release Date: 04/07/2007
Pages: 192
ISBN: 978-1-905798-17-9
Humphrey Lyttelton, also known as Humph, was an English jazz musician, broadcaster, and chairman of the cult BBC radio programme I'm Sorry I Haven't a Clue. Universally loved, he sadly passed away in April 2008. He was survived by his four children.

These cookies may be set through our site by our advertising partners. They may be used by those companies to build a profile of your interests and show you relevant adverts on other sites. They do not store directly personal information, but are based on uniquely identifying your browser and internet device. If you do not allow these cookies, you will experience less targeted advertising.

These cookies enable the website to provide enhanced functionality and personalisation. They may be set by us or by third party providers whose services we have added to our pages. If you do not allow these cookies then some or all of these services may not function properly.

These cookies allow us to count visits and traffic sources so we can measure and improve the performance of our site. They help us to know which pages are the most and least popular and see how visitors move around the site. All information these cookies collect is aggregated and therefore anonymous. If you do not allow these cookies we will not know when you have visited our site, and will not be able to monitor its performance.

Any cookies that may not be particularly necessary for the website to function and is used specifically to collect user personal data via analytics, ads, other embedded contents are termed as non-necessary cookies. It is mandatory to procure user consent prior to running these cookies on your website.