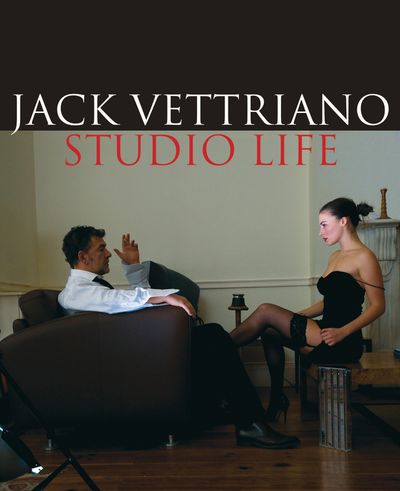 Jack Vettriano: Studio Life: An Intimate Portrait of the Painter

Jack is one of the UK’s most popular, and yet most controversial, contemporary artists.

His pictures sell for a record amount of money, the paintings in his exhibitions are always sold out before the opening and ‘The Singing Butler’ made history for being the most expensive painting by a Scottish living artist ever to be sold at auction. (And surely the same painting is one of the world’s most replicated fine art images?)

Here, for the first time, we get up close and personal with Jack in the studio. We see how he works in his studios in Scotland, London and Nice and we see how these locations influence his paintings. The book also includes brand new paintings never before seen. We analyse Jack’s own cultural influences and the influences his work has come to have on popular culture in turn.

With outstanding and revealing photography by Jillian Edelstein and a foreword from friend and fellow son of Fife, author Ian Rankin, this is a book to delight Jack Vettriano’s fans.

Author: Jack Vettriano
Format: Hardcover
Release Date: 28/04/2008
Pages: 160
ISBN: 978-1-86205-743-2
Jack Vettriano is entirely self-taught. A Scotsman of Italian descent, he left school at sixteen to become a mining engineer working down the Fife coalfields. For his twenty-first birthday a girlfriend gave him a set of watercolour paints and from then on, he spent much of his spare time teaching himself to paint. His first solo exhibition in Edinburgh was a sell-out and since then he has had solo exhibitions in London, Hong Kong and New York. Over the last twenty years, interest in Vettriano’s work has grown consistently. Vettriano’s best known painting, The Singing Butler, was sold at Sotheby’s for close to £750,000. He was awarded an OBE for Services to the Visual Arts. In 2013, a major twenty year Retrospective exhibition of Vettriano's work was staged at Kelvingrove art Gallery and Musuem in Glasgow. He lives in Edinburgh.