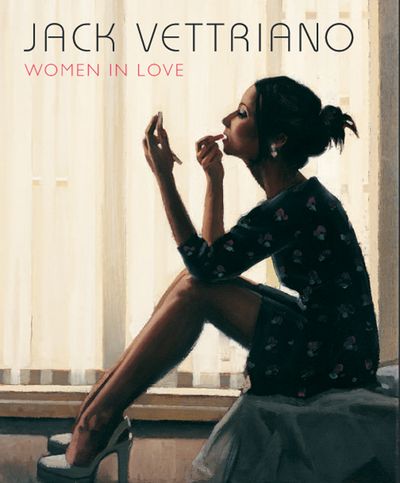 Collected by celebrities the world over, his exhibitions have regularly sold out and paintings now change hands for millions of pounds. This beautifully packaged gift-sized collection features Jack’s women – the mysterious, seductive, beautiful, languid, passionate and powerful. Inspired by his many muses, Jack”s paintings have frequently focused on women and they have formed the subject of some of his most popular and significant paintings, including the Singing Butler and Mad Dogs. Whether relaxing on a beach, reclining in a bar or dancing through the night, this book celebrates Jack”s vision of women and their importance in his work.

Author: Jack Vettriano
Format: Hardback
Release Date: 05/05/2009
Pages: 112
ISBN: 978-1-86205-855-2
Jack Vettriano is entirely self-taught. A Scotsman of Italian descent, he left school at sixteen to become a mining engineer working down the Fife coalfields. For his twenty-first birthday a girlfriend gave him a set of watercolour paints and from then on, he spent much of his spare time teaching himself to paint. His first solo exhibition in Edinburgh was a sell-out and since then he has had solo exhibitions in London, Hong Kong and New York. Over the last twenty years, interest in Vettriano’s work has grown consistently. Vettriano’s best known painting, The Singing Butler, was sold at Sotheby’s for close to £750,000. He was awarded an OBE for Services to the Visual Arts. In 2013, a major twenty year Retrospective exhibition of Vettriano's work was staged at Kelvingrove art Gallery and Musuem in Glasgow. He lives in Edinburgh.

These cookies may be set through our site by our advertising partners. They may be used by those companies to build a profile of your interests and show you relevant adverts on other sites. They do not store directly personal information, but are based on uniquely identifying your browser and internet device. If you do not allow these cookies, you will experience less targeted advertising.

These cookies enable the website to provide enhanced functionality and personalisation. They may be set by us or by third party providers whose services we have added to our pages. If you do not allow these cookies then some or all of these services may not function properly.

These cookies allow us to count visits and traffic sources so we can measure and improve the performance of our site. They help us to know which pages are the most and least popular and see how visitors move around the site. All information these cookies collect is aggregated and therefore anonymous. If you do not allow these cookies we will not know when you have visited our site, and will not be able to monitor its performance.

Any cookies that may not be particularly necessary for the website to function and is used specifically to collect user personal data via analytics, ads, other embedded contents are termed as non-necessary cookies. It is mandatory to procure user consent prior to running these cookies on your website.