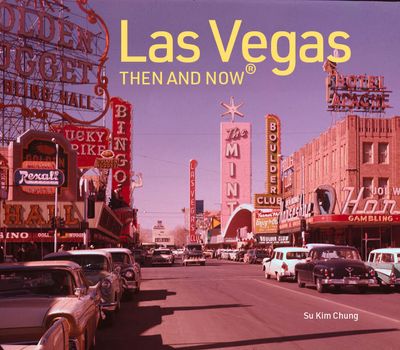 Las Vegas Then and Now captures the city’s evolution from a desert railroad outpost into the gambling and entertainment capital of the world.

Pairing historical photographs of the town with specially commissioned views of the same scene today, this book provides the reader with an intriguing look into the history of a city that has become a cultural icon for all that is best and worst in American society.

Author: Su Kim Chung
Format: Hardback
Release Date: 01/07/2016
Pages: 144
ISBN: 978-1-910904-11-4
Dr. Su Kim Chung has been Manuscripts Librarian/Archivist in Special Collections at the University of Nevada, Las Vegas Libraries since 1999. She is responsible for selecting, preserving, and organizing materials that document the history of Las Vegas and the southern Nevada region. She is particularly interested in documenting the history of entertainment in Las Vegas and has written and presented on the topic numerous times. A graduate of UCLA’s Information Studies program, Chung also has an MA in history from CSU Fresno, and received a PhD in Information Studies at UCLA in 2015.