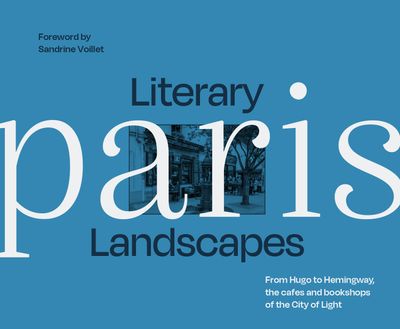 From Voltaire to Verlaine and from Hugo to Hemingway, these are the Paris locations that have influenced modern literature.

The book is an elegant photographic stroll around the bookshops, famous literary restaurants and storied streets of Europe’s favourite tourist destination.

Literary Landscapes: Paris takes this major European city and with picture perfect photography, compiles an album of memorable views linked to the words of Parisian authors, or writers who made Paris their home. It looks at places where books were written, discussed over dinner, and where ultimately the books are sold.

There are the theatres of Molière, Dumas and Beaumarchais along with the incredible Palais Garnier opera house and the legend of Le Fantome by Gaston Leroux.

There are the revered bookshops of the Latin Quarter including the idiosyncratic Shakespeare & Co.

There are the classic grand structures referenced in Victor Hugo novels (and still there) or the mean streets of George Orwell’s Down and Out in Paris.

There are the bouquinistes ranged in their green booths along the Seine, as once tended by Jean Genet. And there is the classic expatriate Paris of Joyce, Stein, Wilde, Hemingway, F. Scott Fitzgerald and the Beat poets.

Literary Landscapes: Paris takes readers on an exclusive cultural journey, introduced by one of the city’s most engaging tourist guides.

Author: Sandrine Voillet
Format: Hardback
Release Date: 02 Feb 2023
Pages: 160
ISBN: 978-0-00-858899-1
Sandrine Voillet is a French art historian, tour leader and TV presenter. After obtaining an MA in Art History at the École du Louvre in Paris, she worked in the arts sector in different roles, including work as a curator for a private art collection. In 2007 she presented a three-part BBC 2 series on the cultural history of Paris, Sandrine’s Paris, with an accompanying book that detailed the art and literary highlights from over three centuries of the City of Light. In 2012 she started a bespoke tour company, leading visitors in the footsteps of artists and poets. She makes frequent appearances on the History Channel and National Geographic, talking about affaires culturel in the city that has contributed so much to the development of art and literature.