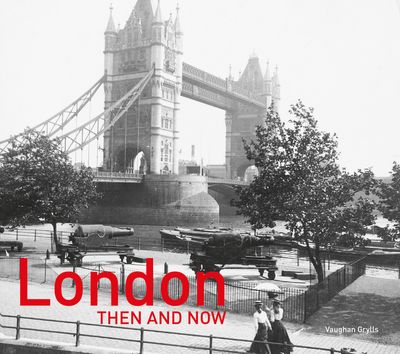 Matching archive photos with their modern viewpoint, London Then and Now gives a fascinating insight into the history of Europe’s financial capital.

London has changed rapidly in the last 150 years. The Luftwaffe helped modify many parts of central London and the East End in the 1940s, but some of the most dramatic changes have come in the last 20 years.

Stretching from Hampton Court and Kew Gardens in West London, the book takes a winding route along the river Thames to the soaring spires of Canary Wharf in Dockland and the stately Royal Naval College at Greenwich.

Author: Vaughan Grylls
Format: Hardback
Release Date: 06/08/2020
Pages: 144
ISBN: 978-1-911641-39-1
Vaughan Grylls is a photographer, author and artist. His photography has been shown in the Photographers’ Gallery, Whitechapel Art Gallery and the Arnolfini. He is represented in several public collections, including the National Museum of Photography, Film and Television, the Contemporary Art Society, Pfizer, Unilever and the Arts Council of Wales. From 1996 to 2005 Grylls was Chief Executive of the Kent Institute of Art and Design. In 2005 he founded the University for the Creative Arts at Canterbury, Epsom, Farnham and Rochester, and serves as Emeritus Professor. He is the author and photographer of Oxford Then and Now, Cambridge Then and Now, Hong Kong Then and Now and Singapore Then and Now.