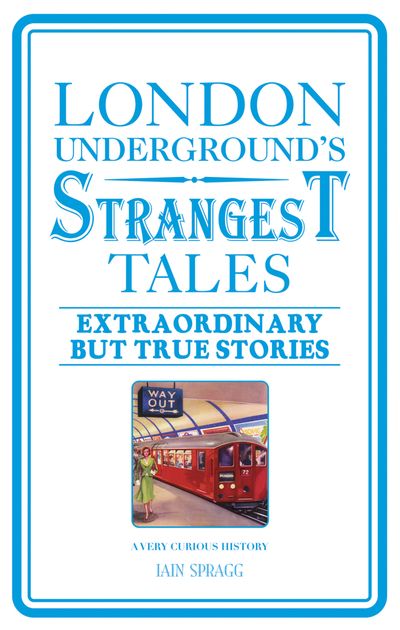 A quirky collection of true stories from the stranger side of the Tube, featuring ghost stations, eccentric stationmasters and the real story of what happens under London at night.

Welcome to the weird and wonderful world of London’s Underground, or as it is affectionately referred to, the Tube. Though this isn’t the usual side of the Tube the tourists, travellers and residents see. (Though, of course, they do see a great deal of strangeness in their daily commutes!). This is the real Underground, the strange and twisted nooks and crannies of what happens hundreds of metres below millions of London legs – from its peculiar past through to its paranormal present and looking forward to its fascinating future. Following on from the bestselling Portico Strangest titles now comes a book devoted to London’s globally envied, and much loved, public transport system. Located deep beneath the heart of Greater London, the Underground is awash with more strangeness than you can shake your pre-paid Oyster card at. In 2013 the whole city will be celebrating the Underground’s 150th birthday – the oldest underground in the world. So, pack up your old kit bag and travel stop-by-stop with us on this strange and fantastic journey along the Northern, Picadilly, Metropolitan, Jubilee, Hammersmith and City and District Line … and explore the Underground as you’ve never seen it before.

London Underground’s Strangest Tales is a treasure trove of the humorous, the odd and the baffling – an alternative travel guide to the Underground’s best-kept secrets. Read on, if you dare! You have been warned.

Author: Iain Spragg
Format: Paperback
Release Date: 01/11/2013
Pages: 176
ISBN: 978-1-907554-97-1
Iain Spragg is an author, Londoner and daily Tube traveller. His favourite Underground line is the Victoria line as not only does it has more than its fair share of strangeness, it also connects him to his beloved North London football team. Iain is the author of The Official Team GB Olympic Annual 2012, The Big Book Of Football's Funniest Quotes, The Lewis Hamilton Story and The Reduced History Of Rugby