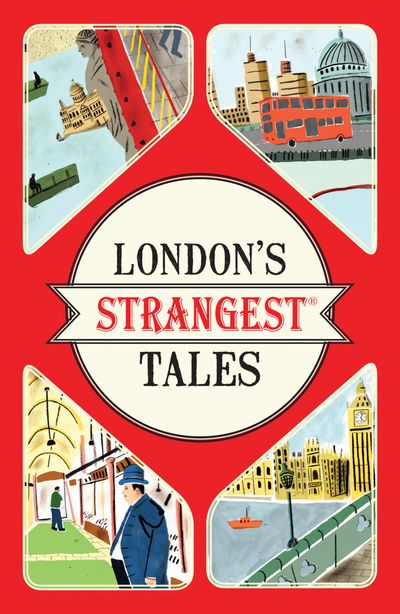 A quirky collection of stories from London’s stranger side, featuring a tiny prison cell in Trafalgar Square, a train disguised as a ship, and a church that’s completely the wrong way round.

London’s Strangest Tales takes a walk on London’s weirder side with an absorbing collection of curious tales from one of the world’s greatest cities. This fascinating book is packed with amazing things you didn’t know about Britain’s capital, like the fact that it’s still forbidden to run, carry an umbrella or whistle in the Burlington Arcade, and the fat lamppost at the corner of Trafalgar Square that is secretly a tiny prison cell. And did you know that the entrance to Buckingham Palace you see from the Mall is actually the back door and not the front? The stories within these pages are bizarre, fascinating, hilarious and, most importantly, true.

Revised, redesigned and updated for a new generation of London-lovers, this book is a brilliant alternative guide to the city, whether you’re a visitor, a daily commuter or one of its 8 million inhabitants.

Author: Tom Quinn
Format: Paperback
Release Date: 11/02/2016
Pages: 256
ISBN: 978-1-910232-88-0
Tom Quinn is a journalist, juggler, orange peel collector and expert on Victorian fish painters, who spends much of his time travelling round Britain looking for quirky subjects to write about. He has written five titles in the best-selling Strangest series. Tom also writes occasional obituaries for The Times and edits Country Business magazine.