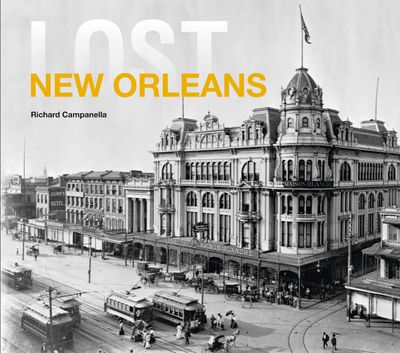 Lost New Orleans is the latest in the series from Pavilion Books that traces the cherished places in a city that time, progress and fashion have swept aside before concerned citizens or the National Register of Historic Places could save them from the wrecker’s ball.

Organised chronologically, starting with the earliest losses and ending with the latest, the book features much-loved New Orleans insitutions that failed to stand the test of time. Grand buildings erected in the Victorian era that were too costly to be refurbished, or movie theaters that the age of television made redundant are featured. Alongside the city’s iconic and much-missed buildings, Lost New Orleans also looks at the industries that have declined or left town.

Author: Richard Campanella
Format: Hardback
Release Date: 02/03/2015
Pages: 144
ISBN: 978-1-909815-60-5
Richard Campanella, a geographer with the Tulane University School of Architecture, is the author of numerous articles and seven critically acclaimed books about New Orleans, including Bourbon Street: A History, Lincoln in New Orleans, Bienville’s Dilemma, and Geographies of New Orleans. The only two-time winner of the Louisiana Endowment for the Humanities Book of the Year Award, Campanella has also received the Williams Prize for Louisiana History, the Tulane Mortar Board Award for Excellence in Teaching, the Hannah Arendt Prize for Scholarship in the Public Interest, and the Monroe Fellowship from the Tulane's New Orleans Center for the Gulf South. He and his family live in New Orleans.