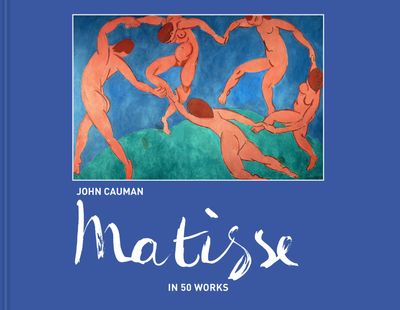 This enthralling and comprehensive new book on Henri Matisse is an eye-opener for all students and art lovers interested in early twentieth-century art.

Taking fifty of Matisse’s most iconic works of art, John Cauman provides an accessible narrative about the man and his work, deciphering the themes, methods and intentions of this truly great artist.

Chronologically spanning from the late nineteenth century to the mid 1950s, each painting, drawing and mural is described and analysed in beautiful detail, within the context of the period, so that the reader can really understand what the artist was hoping to achieve with each work. The paintings are prefaced by an informative introduction that presents the milieu and key characters that featured in Matisse’s life.

Author: John Cauman
Format: Hardback
Release Date: 04/04/2019
Pages: 144
ISBN: 978-1-911595-13-7
John Cauman is an independent curator and writer on late 19th-century and early 20th-century art. He has contributed to various publications including Inheriting Cubism and co-curated the exhibition 'Matisse and American Art', which is showing at the Montclair Art Museum in New Jersey until June 2018. He studied at Columbia and Bennington before receiving his PhD from City University of New York with a dissertation on Matisse and America: 1905-1933.