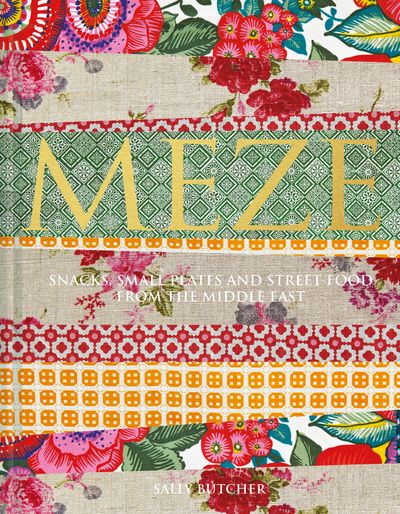 Increasingly, formal dining is being nudged aside in favour of meze-style spreads, and street food has come of age. Meze picks out the Middle East’s most exciting street food and snacks including a range of kebabs, nuts, nibbles and sweet halwah, to bring together for family and friends.

From Aubergine-wrapped Chicken, and Rabbit and Fig Kebabs, to Lebanese Street Pizza Bread and Sudanese Mashed Broad Beans. With drinks to serve alongside such as Iced Turkish Delight Coffee or Kashmiri Tamarind Cooler, without forgetting puddings for a sweet finish, you too can create the home shawarma experience and the definitive Middle Eastern meze.

Packed with recipes from across the region and Sally’s trademark wit and informed anecdotes, this is a burst of intoxicating flavours for all Middle Eastern food enthusiasts.

Author: Sally Butcher
Format: Hardback
Release Date: 11 Jun 2020
Pages: 192
ISBN: 978-1-911641-66-7
Sally Butcher is the fiery-haired proprietress of the notable Persian food store Persepolis in Peckham, London, which she runs with her Persian husband, Jamshid. She is a bestselling author and avid blogger, who has amassed a devoted online following for her food-, shop- and Peckham-related musings. The foodie delights of the Middle East are her specialist subject, but she has been known to venture far and wide for inspiration. Her first book, Persia in Peckham, was published to critical acclaim and short-listed for the 2008 André Simon Award. It was also selected by the Sunday Times as their cookery book of the year. Her following tomes, Persepolis, Veggiestan and Snackistan, published by Pavilion, have also received critical acclaim.