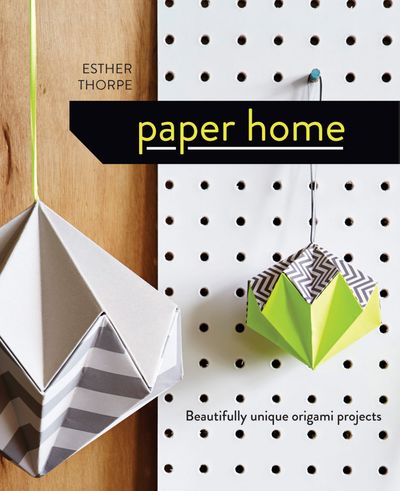 Origami has been around for hundreds of years, but this is a thoroughly modern take on the art of paper folding. Basing her work on simple, traditional shapes and techniques, Esther creates simple, striking items that appear much more intricate than they are.

The book contains projects with varying levels of difficulty. If you consider yourself an origami novice, it might be worth trying slightly simpler projects, like the Triangular Box or Star Garland. These simpler projects are designed to ease you in gently, and many of the items require you to fold multiples of the same shape – an ideal way to practice your skills. Mastering projects that use a similar origami technique is also a good way to develop your folding ability. Projects that lend themselves well together are the Photo Holder, Cube (in the Geometric Mobile) & Vase, which are all based on sonobe origami modules.

Make paper cranes into a child’s mobile or string tiny stars onto a garland before moving on to a functional set of ‘feltigami’ storage baskets and the more ambitious, and incredibly impressive, concertina lampshade.