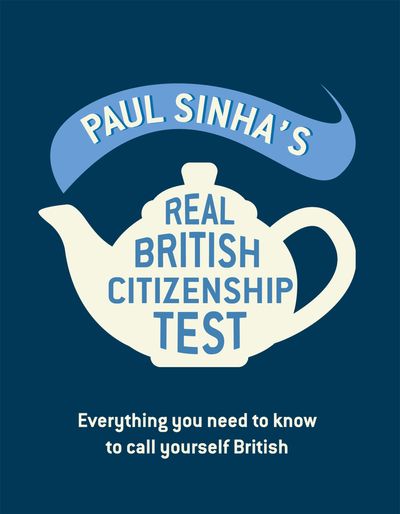 Paul Sinha's Real British Citizenship Test: Everything you need to know to call yourself British

Since 2005, well over one million prospective immigrants have attempted to cement permanent residency in the UK by taking the Home Office-devised ‘Life in the UK’ test.

With questions such as ‘What is the name of the admiral who died in a sea battle in 1805 and has a monument in Trafalgar Square, London?’, it’s as dull as ditchwater and a hopelessly inadequate preparation for life as a fully functioning Brit. After all, there’s simply no point in knowing the exact span of the Hundred Years War if you don’t know about Alan Sugar, Nando’s, the rise of UKIP and the dangers of ordering half a pint.

In this hilarious yet factual guide to the ins and outs of British life, popular stand-up comedian, ITV quiz show villain and fiercely proud Brit Paul Sinha guides you through the minefield. With sections on how to negotiate a pub, the joys of chicken tikka masala (and other British non-British dishes), the finer points of football fandom, British cities that hate each other, whether anyone really cares about religion, and – of course – how to behave in a queue, this chortlesome book is all you need if you want to call yourself a British citizen, whether you were born here or not.

Author: Paul Sinha
Format: Hardcover
Release Date: 01/11/2015
Pages: 160
ISBN: 978-1-910232-29-3
Paul Sinha is an award-winning British stand-up comedian who is best known for his appearances on ITV’s hugely popular game show The Chase, where he known as ‘Sinnerman’ and famous for his sardonic wit. He also appears regularly on Radio 4 – his ‘Paul Sinha’s British Citizenship Test’ show aired in 2013, and he has appeared on the Now Show and Loose Ends. He is currently working on a new radio series about the history of the world. A professionally qualified GP, he lives in London, and was ranked 31st in the World Quizzing Championships in 2014.