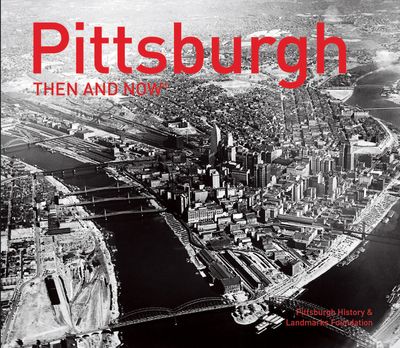 Pairing vinatge photos with the same view today Pittsburgh Then and Now shows the dramatic transformation of Ameroca’s steel town into a modern metropolis.

Pittsburgh rose to industrial prominence thanks to an easy supply of coal and limestone, and by the Civil War the iron industry was thriving. Andrew Carnegie made his fortune here and Pittsburgh became the steel town, endowing Allegheny County with some architectural masterpieces.

In the late twentieth century, the steel industry went into steep decline and the city has reclaimed these sites in an astonishing transformation. Pittsburgh Then and Now shows how much the city has come on its journey to a new economy.

Author: Pittsburgh History & Landmarks Foundation
Format: Hardback
Release Date: 04/07/2016
Pages: 144
ISBN: 978-1-910904-91-6
The Pittsburgh History & Landmarks Foundation (PHLF) was founded in 1964 by a group of citizens who passionately believed that historic preservation, rather than massive demolition, could be a tool for renewing communities, building pride among residents, and achieving sustainable economic development. After more than 50 years of work throughout the Pittsburgh region, PHLF has shown that architectural landmarks and historic neighborhoods are community assets and that historic preservation is a catalyst for urban renewal.