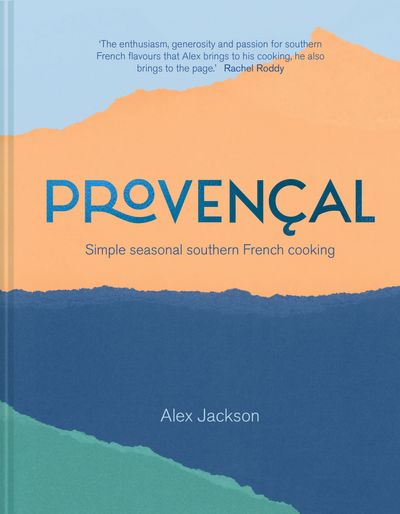 Cook the simple and flavoursome food of the South of France with acclaimed chef Alex Jackson’s Provencal.

Provencal is the stunning reissue of Alex Jackson’s widely acclaimed first book Sardine. This unique collection of recipes encapsulates the beauty and simplicity of Provencal French cooking and shows you how to recreate the flavours of the South of France at home.

Provence and Languedoc are France’s window onto the Mediterranean Sea and all that lies beyond, and the culinary influences that converge there make for a cuisine that is varied, rich and deep. The recipes are unpretentious and seasonal, highlighting Alex’s belief that cooking the food of Provence is about simplicity, good ingredients and generosity of spirit. Lovingly described, the recipes evoke the South of France with their warmth and flavour; from Bouillabaisse and Autumnal Grand Aïoli to a Tomato and Tapenade Tart and Nougat Ice Cream with Fennel Biscuits. The book is divided into seasons and each season contains a ‘Grande Bouffe’ – a set menu for a feast – so you can really impress your guests and celebrate many wonderful ingredients in one evening’s cooking.

Provencal promises to reignite a love affair with French provincial cooking, celebrating its multitude of influences, its focus on seasonal eating and, ultimately, an attitude to food which centres around sharing and enjoyment.

Author: Alex Jackson
Format: Hardcover
Release Date: 11 Apr 2023
Pages: 256
ISBN: 978-1-911682-72-1
Alex Jackson’s passion for French cuisine was ignited during his studenthood in Paris, when he discovered what simple French food really was. Working as a chef, he found himself drawn – through books, food and travel – further south to Provence, whose cuisine he went on to showcase at Sardine, his London restaurant. Sardine gained rave reviews from Fay Maschler, Diana Henry, Marina O\'Loughlin and Tom Parker Bowles, and established itself firmly on the London food scene before lockdown forced its closure. Alex is now head chef at Soho’s acclaimed Noble Rot.

‘I love … Alex Jackson’s cooking. The food he offers is from Provence and the Languedoc, areas that we haven’t been so curious about in the last few decades, but I’m thrilled they’re back. It’s time to revisit the region. There’s still so much to try.' - Diana Henry -

'This is the book I used more than any other last year … His writing is a delight and, like his cooking, hits just the right balance between precision and ease.' - Rachel Roddy -

'Seductively reminds us of the comforting allure of French food.' - Nigella Lawson -

'No book this year has made me feel hungrier.' - Bee Wilson, Sunday Times -

”'French flavours will lure us in shoals … It is delectable.” - - Fay Maschler, Evening Standard

”'Simple, unpretentious and understated, entirely without ego, attitude or pomp … [Provencal] realises how hard simple is to get right. And does so, for the most part, with flame-licked aplomb.” - - Tom Parker Bowles, Mail on Sunday