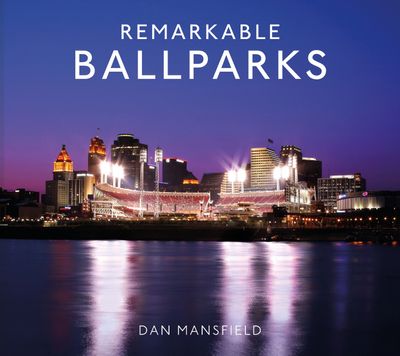 A beautifully illustrated collection of some of the most amazing venues to host baseball games, from megastructures to local-ballparks-with-a-story.

What started as America’s National Pastime is now a global phenomenon with multi-million dollar baseball leagues around the world and enough countries playing the game to warrant its inclusion in the 2020/1 Olympics.

Remarkable Ballparks looks at the range of amazing places that host baseball games starting with the historic Wrigley Field rooftop grandstands, together with the home of the Green Monster, Fenway Park. In 1960, John Updike writing in the New Yorker described Fenway Park as: “a lyric little bandbox of a ballpark”.

Then there are the mega-structures of the modern ballparks with retractable roofs to protect against weather: Toronto’s Roger’s Centre and Seattle’s T-Mobile Park for rain, and Miami’s Marlins Park for heat. Baseball is an American family tradition, extolled by the Hall of Fame in Cooperstown and its accompanying pitches, along with the movie site from Field of Dreams in Dyersville, Iowa, which has fulfilled the prophecy: ‘If you build it, they will come’.

Modern ballparks have introduced some remarkable features centerfield, including the mini arboretum at Coors Field and the Devil Rays tank at Tropicana Field. The Arizona Diamondbacks might have a swimming pool at Chase Field, but the MLB stadium can’t match the waterpark ride at Frisco’s Dr. Pepper Stadium.

The Modern Woodmen Ballpark in Davenport Iowa doesn’t let a small matter like the Mississippi flooding stop play. After building perimeter flood barriers and walkways to the stadium, the ballpark has become an accessible island. Venturing abroad, Taipei and Tokyo have their own baseball domes, and in the Caribbean, the Minnesota Twins have opened a baseball academy in the Dominican Republic.

Perhaps there is no more touching a story than the Gail S. Halvorsen Ballpark opened in Berlin in 2019. Lieutenant Halversen took part in the Berlin Airlift from 1948 to 1949 and became known as the ‘Candy Bomber’ after dropping candy attached to parachutes for children gathered to watch the planes land. At age 98 he was invited back to the city for the naming of a baseball park in his name. A remarkable man and his ballpark.

Author: Dan Mansfield
Format: Hardback
Release Date: 05/05/2022
Pages: 224
ISBN: 978-1-911682-08-0
Dan Mansfield is a lifelong Chicago Cubs fan. Working for Thunder Bay Press in San Diego he has helped edit every major North American city Then & Now, including the best-selling Ballparks Then & Now by Eric Enders. A collector of quirky baseball stats, Dan has been following baseball since the 1970s and is now old enough to say, “Back in the day, no one knew what Nolan Ryan’s spin rate was.”