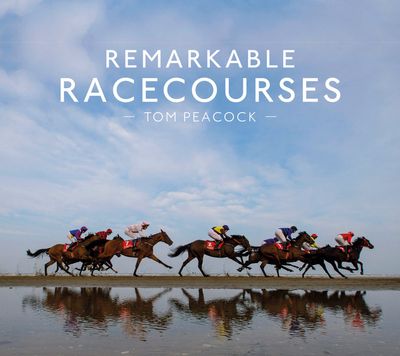 Remarkable Racecourses is a beautifully presented collection of amazing racecourses from five continents captured by some of the world’s greatest racing photographers.

Remarkable Racecourses is a beautifully presented collection of the world’s most striking racecourses. Lavish photographs and informative text show why each racecourse is unique, whether it’s the oldest, longest, shortest, most southerly, most northerly, most beautiful or most extraordinary. Among the 70-plus racecourses included are Laytown in Ireland (the only race run on a beach under Turf Club rules), St. Moritz in Switzerland (which takes place on a frozen lake), Pukekohe Park in New Zealand (which is located in the centre of a motor racing circuit), Cartmel in Cumbria (where spectators enjoy the action from the centre of the circuit) and Epsom Downs in Surrey (which is a left-handed, open-ended, horseshoe-shaped course). The book travels across continents, from rural England to Outer Mongolia, to bring you the most astonishing racecourses on the planet.

Author: Tom Peacock
Format: Hardcover
Release Date: 01/06/2018
Pages: 224
ISBN: 978-1-911216-87-2
Tom Peacock has no recollection of his first racecourse visit, when taken in a pushchair to see the 1982 King George VI Chase at Kempton Park, but something must have rubbed off on him. After university he landed a production role for a racing television station. Switching to journalism, he worked for the Press Association for the best part of a decade and most recently was a racing reporter for the Daily Telegraph, covering meetings from as far afield as Australia and Qatar. Tom has twice been nominated as Reporter Of The Year at the Horserace Writers & Photographers Association (HWPA) awards and has appeared as an expert for CNN and talkSPORT.