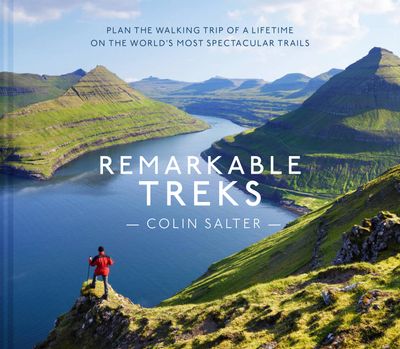 Remarkable Treks is a compendium of exhilarating walks from around the planet – some lasting weeks, some lasting just a few days, but all of them set against spectacular backdrops.

The treks range in length from one-day hikes, to three-day hikes, to walks of almost expeditionary length. Thankfully, some of the longer routes, such as the Continental Divide Trail in North America, which traverses the Rockies from Mexico to Canada, can be split up into sections.

However for completists there are smaller challengers, such as the Pennine Way in England, which is never too far away from civilization, and by civilization we mean the pub.

For the thrill-seeking backpackers there are the craggy peaks of Corsica (GR20 – which carries the ominous warning ‘some scrambling required’), or the hike up to Everest Base Camp.

Author: Colin Salter
Format: Hardback
Release Date: 13 Apr 2023
Pages: 224
ISBN: 978-1-911682-59-2
Colin Salter is both a keen walker and cyclist. Based in Edinburgh he has completed sections of the arduous North Coast 500 and often spends the summer roaming his native Scotland from a base in his converted minibus. He is the author of Remarkable Road Trips.which was nominated in the 2019 Stanford Travel Books awards and is also the lead author in the popular ‘100’ reference series; books that include 100 Posters, 100 Science Discoveries and 100 Symbols.