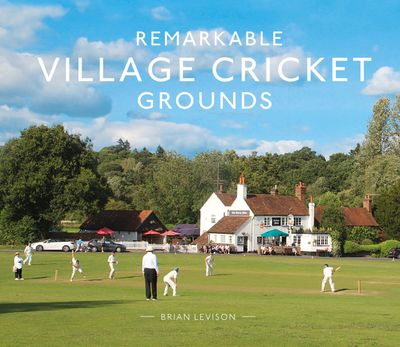 In the original book he covered some of the largest stadia where cricket is played throughout the world. In Remarkable Village Cricket Grounds he concentrates on the smallest.

The inventory of beautiful and atmospheric grounds includes those played by the seaside, at the edge of moorland, in front of grand country houses or on wind-blasted hillsides. Village cricket is played next to windmills, thatched cottages, trout streams, in the heart of Cotswold stone hamlets, and on many of the country’s verdant village greens.

There are some classic cricketing pubs included along with lavish teas, ancient pitch rollers, equally ancient club secretaries and a variety of warning signs for those wishing to park their car within slogging distance. Almost all of the venues are located in the kind of set-piece British landscape that will have the tourist boards begging for copies.

Author: Brian Levison
Format: Hardback
Release Date: 01/10/2018
Pages: 224
ISBN: 978-1-911595-56-4
Brian Levison has a lifelong interest in cricket and played club cricket for several years. His books include the highly acclaimed cricket anthology All in a Day's Play (Constable, 2012) and Amazing & Extraordinary Facts: Cricket (David & Charles, 2012). He was one of six writers and commentators selected for the MCC's 'Cricket's Crown Jewels' exhibition in the Lord's Museum celebrating 150 years of the Wisden Cricketers' Almanack in 2014.