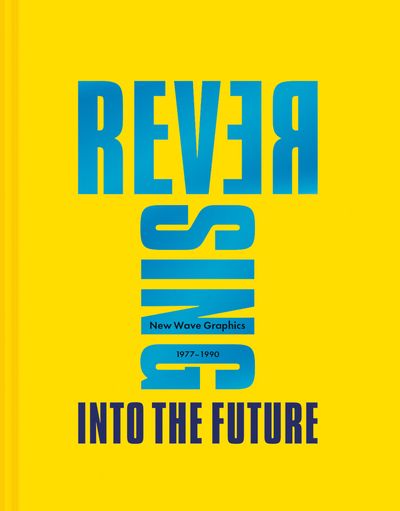 Reversing into the Future: New Wave Graphics 1977–1990 is a unique and fascinating book of graphic design history curated from Andrew Krivine’s personal and vast collection of original posters, flyers, artworks and memorabilia from the golden age of New Wave.

Packed with exclusive artworks and expert texts, this is the comprehensive guide to the unforgettable period of New Wave. Having witnessed an emerging generation of music buyers who’d been energised by punk, major record labels and independents alike went in search of sounds and visions that captured something of the energy and cheeky attitude of punk, while ignoring its political edge. New Wave was embraced by the mainstream music and entertainment industries and used to promote artists who rejected the anti-consumerist, anti-materialistic, black-and-white nihilism of the original punk movement in favour of a more optimistic, humorous and colourful present refracted through the past. In doing so, and as this book illustrates, the New Wave followed Marshall McLuhan’s dictum that ‘we drive boldly into the future with our eyes fixed firmly on the rear-view mirror’. New Wave artists rejected punk’s satirical, parodic and irreverent treatment of rock ’n’ roll’s original, iconic imagery preferring to display it reverently or referenced with love and affection.

A collectable item itself, the book is beautifully produced with front and back cover artwork by world-renowned designers Malcolm Garrett and Chip Kidd. Alongside a vast array of original artworks and graphics from the New Wave period, the book includes text contributions from recognised and respected commentators, critics and designers from the UK, US and Australia. Documenting the incredible impact of New Wave, this is the ideal book for die-hard music fans and graphic design aficionados alike.

Author: Andrew Krivine
Format: Hardcover
Release Date: 21/12/2021
Pages: 336
ISBN: 978-1-911663-95-9
Andrew Krivine owns one of the largest private collections of punk graphic design and memorabilia in the world. He began collecting when staying with his cousin John Krivine, who founded the seminal punk stores Acme Attractions and BOY in London in the 1970s. Andrew is a resident of New York, and he continues to add to his collection.