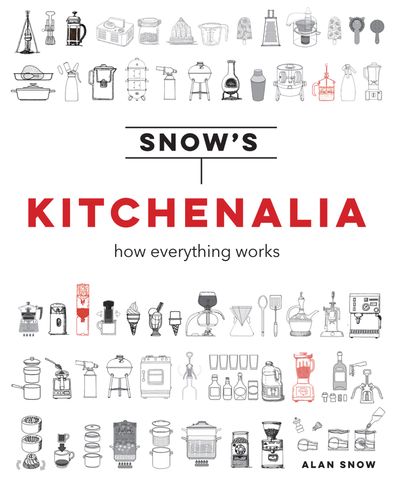 Snow's Kitchenalia: How everything works

Designed to free us up from the shackles of recipe books, Snow’s fascinating visual miscellany shows readers the ins, outs, hows and whys of all manner of cooking equipment, tools and techniques, from ovens, blenders and coffee machines, to more sophisticated chefs’ equipment and everything in between.

Arranged into four practical sections: Tools, Cooking, Drinks and Kitchens, each section is accompanied by an insightful commentary that offers clear explanations and instructions. As well as absorbing historical and scientific details the book is brimming with charming diagrams and sequences. Once you’ve grown familiar with each appliance, you’ll find good reason to put your newly acquired knowledge to the test, with recipes as you’ve never seen them before.

The perfect gift for every keen cook, whether amateur, enthusiast or professional, this unique book is at once a visual celebration of the kitchen and a fascinating exploration of culinary science and technique.

Author: Alan Snow
Format: Hardback
Release Date: 05 Oct 2017
Pages: 208
ISBN: 978-1-911216-73-5
Alan Snow is an award-winning children’s book illustrator and designer who has worked on more than 160 books. His novel, Here Be Monsters (OUP, 2005), was made into an animated film, The Boxtrolls, which spent several weeks at the top of the UK box office in 2015. Fascinated with ‘how things work’, Alan turned his attentions towards the kitchen, acquiring sophisticated equipment such as vacuum machine, centrifuge, freeze dryer and shock chiller, and has developed his own culinary ‘lab’. He has since consulted for The Ethicurian restaurant. Alan now runs workshops and courses for professional chefs and cooks. His gastronomic experiments are due to be filmed for a documentary. Alan has won numerous awards for his work as a children’s book illustrator as well as for design and computer animation.